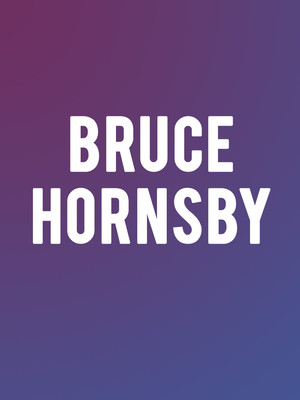 Bruce Hornsby And The Noisemakers

Bruce and his band out on tour!

Why See Bruce Hornsby And The Noisemakers?

out on the road

Thirty years after signing with RCA and winning a Best New Artist Grammy and launching one of contemporary music's most diverse and collaborative careers, Bruce Hornsby and his band are still busy touring, and making joyful noise for new fans and old alike.

Best known for his use of exotic instruments Bruce has garnered fans from across the globe as well as winning three Grammy awards. A man of many projects Bruce and his Noisemakers have been performing together since the late '90s, resulting in four albums and a string of iconic singles. Expect to hear some old favorites when Bruce heads out on tour, and who knows maybe you'll be the first to hear some new music!

Elisa Nelsen: “Worth Every Penny and More”

What a great show!! Bruce Hornsby gave a tremendous performance and interacted... more

Bruce's incomparable gifts were on display last night as he masterfully... more

Read all reviews Write a review

Sound good to you? Share this page on social media and let your friends know about Bruce Hornsby And The Noisemakers at Lexington Opera House.

Keep up to date

I want email news and updates for events in my area! Read how we protect your data.

You know the drill, websites need cookies to make them work. Details of how we do it here. Hello! It's probably obvious, but we need to let you know that we use cookies to enable us to run this website and for it to actually work! You can find lots more detail in our Cookie Policy.
Got it!